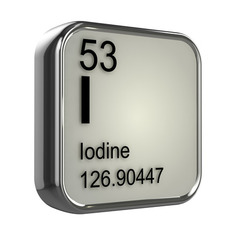 Though the human need for iodine is genuine, it has been greatly misunderstood and even feared by the medical establishment. There are a few reasons for this.

When iodine binds to certain isotopes, a toxic combination occurs. However, iodine in its elemental form or as a salt additive is perfectly safe.

Also, in a study published almost 60 years ago it was suggested that too much iodine could cause serious side effects. The National Institute of Health’s (NIH) library sites only 2 cases of iodine toxicity related to elemental iodine. Both of these were extreme cases, one documenting problems after an individual ingested a liter of pure iodine.

These studies have not been challenged until recently, in 2004, by Dr. Guy Abraham, former professor of obstetrics, gynecology and endocrinology at UCLA School of Medicine. He published a series of articles refuting iodine’s supposed dangers, which suggest that iodine is safe and essential to our strength, vitality and wellness. He has also thoroughly documented the positive side effects of iodine.

IODINE AND THE THYROID, TISSUES AND CELLS
Dr. Guy Abraham estimated the total amount of iodine that should be present in the body is 1,500 – 2,000 mg. With this level of iodine in the tissues, the thyroid would have 50 mg of iodine. The breasts, muscles and fat would follow as the respective greatest reserves of iodine in the body. Once iodine sufficiency is reached, Dr. Abraham has shown that the required daily intake of iodine to maintain the body’s needs is at least 13 mg. per day. The current RDA for iodine in adults is only 150 micrograms per day, a mere drop in the bucket compared to what this new research reflects.

Thyroid illness, under diagnosed in the U.S., is the most prevalent symptom of iodine deficiency. Thyroid hormones are made with iodine, therefore iodine concentration is higher there than in any other part of the body. The thyroid acts as the body’s major metabolic regulator. Every cell relies on thyroid hormones for optimal functioning. When there is insufficient iodine, the necessary thyroid molecules cannot be manufactured. ( Hypothyroidism )

In addition to the above symptoms, thyroid function can be measured via serum levels, monitoring basal body temperature, saliva testing and heart variability testing.

Iodine’s ability to protect tissue damage both in the thyroid and the rest of the body is directly related to the body’s iodine saturation. Receptor sites in all of our cell walls receive halogens, the non-metallic chemical elements. These halogens include iodine, chlorine, fluorine and bromine. When a cell wall has insufficient iodine, it is left open to bind with other halogen molecules such as chlorine, fluorine and bromine. The cell may also bind with molecules that contain iodine, such as radioactive iodine, potassium bromide and per chlorate, to name just a few. This is the interchangeability of the halogens in the biological process.

The problem with this interchangeability is that some halogens can inhibit the body from performing to its capacity. Also, disease is encouraged when cells bind to sites that are meant for iodine. Dioxin and per chlorate, two of the most dangerous and most prevalent environmental pollutants, have the ability to bind to these sites. Detoxification and protection from these carcinogenic hormone disruptors is achieved through adequate levels of iodine in the tissues.

Some of the results of the proper amount of iodine in the body are:
*  Prevention and reversal of halogen toxicity
*  Improved thyroid and adrenal function
*  Regulation of blood pressure
*  Resolving cardiac arrhythmia
*  Improved sugar metabolism and diabetes
*  Regulating moods
*  Alleviation of fibrocystic breast and ovaries
*  Possibility of cancer prevention in breast, ovaries, uterus, prostate and thyroid
*  Prevention of parasites

TESTING FOR IODINE SUFFICIENCY
An easy test for iodine sufficiency is the patch test. Swab a 2 inch square of iodine on the soft skin of the inner upper arm and check for its absorption rate. In a body fully iodine satisfied it should take 18 to 24 hours for the iodine to be absorbed. Check the spot in 6 hours and then again at 12 hours. If the iodine is completely absorbed, it is a solid indicator you are iodine deficient.

Urine tests for iodine excretion are also available. I recommend these after the patch test has been done and some level of sufficiency has been achieved. It is at this time that the urine test is helpful in getting specific values for long term supplementation. This test is also beneficial if there is a history of breast cancer or thyroid disease.

GETTING THE IODINE WE NEED
Iodine is only found naturally occurring in the ocean. Sea vegetables and fish such as cod, bass, haddock and perch are abundant sources of iodine. The Japanese ingest approximately 13.8 mg of iodine per day through consumption of sea vegetables. They have a much lower incidence of breast cancer, fibrocystic breast, ovarian and thyroid disease. Crops that are grown in soil near the ocean usually have an adequate amount of iodine. Inland gardeners can easily supplement their soils with elemental iodine or seaweed fertilizer. Kelp, a sea vegetable high in iodine, is great in vegetable gardens.

Sea salt contains even less iodine. However, it does have other minerals that assist in better metabolizing the iodine which is obtained from more effective sources. The brand of sea salt I recommend is Celtic Sea Salt.

In the absence of iodine absorption through diet, supplementation makes perfect sense.

Lugol’s Iodine, named for the French physician who developed it in the 1820’s, is the most biologically available iodine, and therefore the most easily accessible for our bodies to metabolize. It has been used safely and successfully for almost 200 years. This is available in tablets or liquid.

For those who are iodine deficient, gradually build up to taking 50 mg. daily for three months. Then take the Loading Iodine test from FFP Laboratory or Doctor’s Data (call the office for more information) and from those findings adjust your dose.

At the onset of iodine supplementation, some side symptoms can occur. These symptoms are not allergic reactions, but are detoxification reactions as the metabolic pathways are clearing other halogens, which in the absence of iodine have taken its place. Clearing symptoms usually last several days, and include salivation, sneezing, a brassy taste in the mouth, a frontal or sinus type headache, an acne-like rash, or foul smelling urine. These symptoms can be resolved by halving the iodine dosage and gradually working back up to the recommended dose. Taking chlorophyll for metallic taste is helpful, and taking 3000 mg of vitamin C will subvert some symptoms. In addition, a good multiple vitamin helps to assist metabolic pathway clearing.

INCIDENTS THROUGHOUT HISTORY OF IODINE’S POSITIVE EFFECTS
A study done in the early 1900’s found children in Ohio and Michigan demonstrated goiters that responded to iodine supplementation. It was at this point that supplementing salt with iodine was introduced in the United States. Even though the amount of iodine absorbed and metabolized from salt is minimal, it was enough to reduce the problems of goiter in children.

When Hiroshima was bombed during WWII, Dr. George Osawa noticed the people least effected by the radiation were those eating a simple indigenous diet, which included iodine rich seaweed. One of the treatments for exposure to radiation is iodine.

Potassium iodine was hailed in Russia and Poland, as a God send, when it proved to prevent and help with thyroid susceptibility to radioactive iodine after the Chernobyl accident.

SUMMARY
Iodine’s importance in human life has been under estimated in the last century due to unfortunate reporting of information. Because it is critical to the most elemental human physiology, everyone needs to be tested for iodine sufficiency and reap the benefits of a fully functioning metabolism. Testing is simple and supplementation is inexpensive. Hopefully, in the future there will be agricultural practices that will provide this nutrient in our land based food. It would also be wonderful if the toxicity of the entire environment could be diminished. Until that time, you and your loved ones will be well served by doing the patch test periodically and adding iodine to your supplemental regime.